This has been a strong theme in the work of the RDC.  Within this area, many members took part in a project using the "lesson preparation method" to examine prospective teachers' understanding of various concepts.

Back to main Projects Page
BACKGROUND
In the late 1980s and the 1990s, much of the work reported by RDC members was concerned broadly with teachers' and prospective teachers' thinking and understanding of concepts.  Findings such as those on the extent and the persistence of students' intuitive ideas about the natural world challenged members to rethink the role of the process of knowledge construction.  In particular, a collaborative project was started by mathematics educators in the RDC and developed to include physics, chemistry and biology educators, as described below.  Papers reflecting the group's work in this period were published in two special issues of the European Journal of Teacher Education, no. 20 (2) and no. 22 (1). 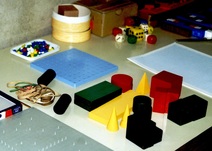 A few of the resources available
In 1995, during the annual conference held in Oslo, a small group of mathematics educators within the RDC began a small-scale cross-national project through which they would investigate the thinking and understanding that pre-service teachers bring to their teacher education programmes.  They initiated what became known as the "lesson preparation method."  A few students from each country (more specifically, from the institutions in which the group members worked) were chosen to participate, and as a small reward were given T-shirts from the other institutions involved (see main picture).  They were then asked, individually, to spend time in a room well supplied with appropriate teaching resources, and to plan a lesson introducing the concept of area.  Each student was interviewed; the students explained or “taught” their lesson plans and discussed them with the interviewers.  In the analysis of the transcripts of the interviews, Shulman’s (1987) framework of content knowledge, pedagogical knowledge and pedagogical content knowledge (CK, PK and PCK) proved useful, with the initial focus being on CK.  The “Oslo Mathematics Project” made its first reports to the 1996 annual conference in Glasgow (Berenson et al., 1997; van der Valk and Broekman, 1997 - see conference papers), and a seminal paper was published in the European Journal of Teacher Education, no. 20 (2).
THE LESSON PREPARATION METHOD:  FURTHER USE
Over the following years, subject-specific subgroups were formed for physics, chemistry and biology as well as mathematics, and the work of the Oslo Mathematics Project was replicated and developed.  Reports were given at the conferences, and papers were published in the European Journal of Teacher Education, no. 22 (1),  as well as in other journals and conference proceedings [links to be added].
Next project